Bess Testlab, Inc. (BESS), is a CPUC certified MBE/DBE company that provides solutions to mitigate the underground utility related risks associated with the design and construction of civil and infrastructure projects.

The Bess Team supports the Utility Industry with a group of professionals who are dedicated to locating, inspecting, and mapping of all utilities and subsurface structures to protect their integrity and the safety of our community.

Electromagnetic Pipe and cable locators and Ground penetrating radar falls under ASCE 38-02 Quality Level B, which involves the application of surface geophysical methods to determine the existence and horizontal position of the utilities.  This is referred to as utility designating and it addresses problems caused by inaccurate utility records, abandoned or unrecorded facilities, and lost recollections.  Quality Level B often involves hiring a private locating company such as BESS to evaluate the site using multiple non-intrusive technologies.  This type of investigations are the most successful when the private locating contractor has been provided all the information from the Quality Level C and D studies.  The investigations can vary from scanning a small area around a proposed boring location to designating all utilities across a project site.

Electromagnetic pipe locators operate by locating either a background signal or by locating a signal introduced into the utility line using a transmitter.  The EM pipe locators consist of a transmitter and a receiver. The transmitter when is direct connected to a conductive pipe or tracing wire emits radio frequency electromagnetic signals chich are traced above ground by a receiver capable of detecting such signals.There are three (3) sources of background signals which can be produced. A utility line acts like a radio antenna, producing electrons which can be picked up with a receiver (Radio frequency). Current carrying conductors have a 60HZ signal associated with them. This signal occurs in all active current power lines regardless of voltage. Utilities in close proximity to power lines or used as grounds may also have a 60HZ signal which can be picked up with a receiver (Electromagnetic).

The ground Penetrating Radar (GPR) is one of the latest technique utilized in the location of underground utilities.  A GPR signal is sent into the ground via a transmitter.  Some portion of the signal will be reflected from the metallic or non-mettalic utility which is recorded with a receiver.  more

Sondes are used to locate nonmetal sewer pipes, storm drains and conduits. Sondes also are used to locate cast iron drain pipe. A sonde is a small radio transmitter inserted into a pipe. Once inside, a conventional pipe locator is used to locate the sonde. The pipe’s position is then marked on the ground. The sonde is pushed further into the pipe, the receiver relocates the sonde and the pipe’s position is again marked. This process is repeated until the desired section of pipe is traced. Another option is to have a plumber snake the pipe. We can attach a transmitter to the snake and trace the line from the signal the snake emits.  more

Deliverable results can range from a simple marking on the ground surface, PDF report with images and line overlay, CAD drawing or a geo-referenced aerial imagery that document the survey results.  Any depth estimates should be considered approximations as they are derived solely from the non-intrusive equipment.  more 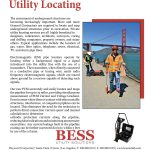 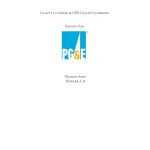